The classic Ramadan dessert! Atayef is typically made with little pancakes filled with ashta (cream) or crushed walnuts. Today I’m going to show you a trick I learned from my Mother-in-law. Instead of making the pancakes, I made them using sliced bread. It’s such a great hack, saves some time and tastes amazing!

WHAT IS ATAYEF?
Atayef are mini pancakes filled with ashta (cream) or nuts. They’re usually made during the holy month of Ramadan and sold in all Middle-Eastern dessert shops around the globe. Once filled, they can be eaten as is with a drizzle of simple syrup or deep fried then soaked in simple syrup. They’re such a delicious treat and trust me, you can’t have just one!

HOW DO I MAKE THEM?
It’s best to make the simple syrup first and allow to cool to room temperature. You’ll likely have some syrup leftover from this recipe, you can easily reuse it for another dessert in the future. Next you’ll make the filling which is 3 ingredients. Walnuts, cinnamon and simple syrup all get pulsed together in the food processor until they’re small pieces. To flatten the bread, the easiest way I found was to roll it with a rolling pin then place the bread over the samosa mold. Add about 1 tablespoon of the filling to the center then a little water along the edges where the bread will be sealed together. Once you close the mold, remove the excess bread and save them to make breadcrumbs.
Deep fry the atayef in hot oil until golden brown then drain on a paper towel lined plate for 1-2 minutes. While they’re still hot, drop them into the simple syrup and allow to soak for 1-2 minutes. Remove the atayef from the syrup using a strainer to allow excess syrup to drain off and then plate them with a sprinkle of crushed pistachios. 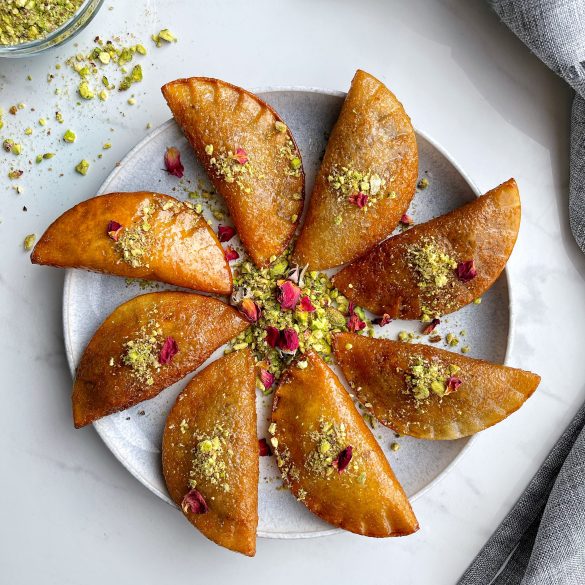 2 tbsp water for sealing the atayef

For the simple syrup:

Start by making the simple syrup.

In a pot on high heat add sugar & water.

Bring to a boil then add lemon & orange blossom.

Next, make the filling.

In a food processor pulse walnuts, syrup & cinnamon a few times to break up the walnuts into small pieces.  Set aside into a small bowl.

On a flat surface, flatten a slice of bread with a rolling pin until it’s completely flat.

Place the bread on the samosa mold.

Add 1 tbsp of the filling to the center of the bread.

Using your finger, add a little water on the bread where the seams will be closed.

Press the mold firmly together to seal the edges.

Repeat until all the atayef have been shaped.

Gently drop the atayef into the oil and cook until golden brown, flipping halfway.

They will cook very quickly (about 45 seconds)

Remove the atayef from the oil and allow to drain on a paper towel lined plate for 1 minute then submerge into the simple syrup.

Allow to soak in the syrup for about 2 minutes then remove from the syrup and transfer to a platter.  Garnish with crushed pistachios.

Excess bread can be used for breadcrumbs. Leftover simple syrup can be reused in other desserts.

Did You Make This or any other recipe?
Leave a COMMENT and don't forget to RATE this recipe! If you snapped some pics, share it with me on Instagram at @jenan_zammar so I can repost on my stories!
dessertsramadan
2 comments
1
FacebookTwitterPinterestEmail
previous post

Jenan – you make all the food restaurant worthy, yet SO easy! I made these today and they were a BOMB! Fell in love with the recipe – so easy to put together and tastes AMAZING! Thank you for sharing with us ❤️

So happy to hear you enjoyed them! Thank you for your kind words! xo

Hi, I'm Jenan and welcome to my kitchen! I'm a Lebanese mom of 3 and love to share all of my recipes! Years ago I had no idea what I was doing in the kitchen but with lots of trial and errors, I can now whip up a meal with little effort! I'm all about simplifying meals but still enjoying the delicious flavours food has to offer! From my kitchen to yours with love xo